I am based in Atlanta, Georgia. But I often travel for shows and events.

I’ve always loved writing at a young age. I used to write short stories and poems in elementary school, which developed into writing song lyrics and what I do today. 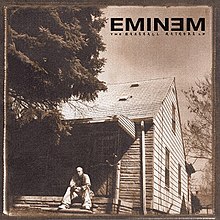 The first CD I ever got as a kid was Eminem’s The Marshall Mathers LP, and then The Slim Shady LP shortly after. As most people know, Eminem is my biggest inspiration and favorite artist, so his first two CDs led me to fall in love with hip-hop. Through Em, I found artists that he admired like 2Pac, Nas, Redman, and I just became obsessive with hip-hop as a child. I would proverbially “dig in the crates” to study classic albums just to see what I could learn from them as a young MC.

When I was a teen, I remember going to see Saigon perform when he had just came out. He had just signed with Just Blaze and he was one of my favorite rappers at the time, so watching him perform classic songs off his mixtapes was incredibly memorable.

Was there a defining moment for you in your childhood that you feel impacted the way you operate in the world today?

I was singled out at an early age due to my ethnicity, so I suppose discrimination plays a huge role in how I perceive the world. I know I have an uphill battle in the music industry, but I continue to fight and flip the script on anyone who tries to convince me that I’ll never make it in America because I’m Asian.

I started rapping when I was 12, and I’ve been serious about music ever since then. I then accidentally discovered I could sing when I was 15 so I added that to my artistic arsenal, which allow me to be the versatile triple-threat that I am today as a rapper, singer, and songwriter.

It’s a hard question because I feel like I have so many songs that represent a certain side of me. As a lover, as a fighter. As a rapper, as a singer. However, if I had to only pick one at the moment, I would say “Discriminated”:

“Discriminated” is a personal song about my childhood and the racism that I dealt with growing up as well as the discrimination that I face today as an Asian-American artist. All in all, it’s a very universal record that I feel everyone can relate to. It’s the last song on my EP “First Time’s The Charm”, because I want the listener to feel like they are not alone in their struggles when they finish listening to my project.

I think social media has completely shifted the climate and leveled the playing field. In the past, the only surefire way to secure fame and fortune was to get lucky enough to sign a major recording deal and cross your fingers that they release your project to the world. Nowadays, we have the power to put ourselves on, which still requires a LOT of work. However, the downside of the Internet era is labels no longer find talent and develop them into stars. Instead, they look at views and followers and sign whoever they feel like can get them rich in the shortest amount of time and then on to the next one. Not only that but it’s 2018 and there is still heavy resistance against Asian-Americans being seen and heard in the American market. All good, I’ma change all that.

I want people to start getting along for real, for real. I don’t mean in the “Kumbaya, let’s hold hands and sing by the campfire” sense. I mean actually appreciate one another and understand each other’s struggles. To care about each other’s plights and issues, not to gain clout from it on Twitter, but because they choose compassion over hate and understanding over ignorance.

I’m about to put up a music video for a collaborative single that I did with Bay-Area rapper Chow Mane called “Rare”, and I’m also getting ready to release my music video for “Color Me Bad”, my next single off my “First Time’s The Charm” EP. After that, I have more singles and music videos on the way, and who knows, maybe even another project if the timing is right. Y’all will have to follow me to find out what happens on the next episode of Alan Ball Z.

You can find me everywhere at: @AlanZmusic

Alan Z: I want the world to know that I cannot be pigeonholed and I cannot be reduced to just one “niche” or category. I embrace my duality as a lover and a fighter, as a rapper and a singer. For you to understand what I can truly offer through my art, you have to listen to multiple songs from me to see what I’m all about. My EP “First Time’s The Charm” is a good start: I have hip-hop anthems like No Handouts and Discriminated, urban pop bangers like “Color Me Bad”, “All of You”, and “Windows Tinted”, and crossover records like “Touch And Go” and “Distance”. Follow me on Instagram and Facebook to get to know me better.